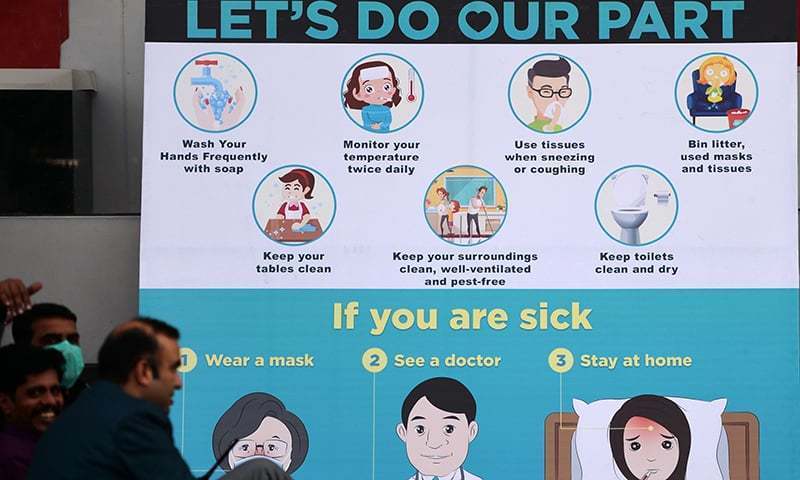 ISLAMABAD: The capital administration has sealed 10 streets in seven residential sectors after another 157 cases of Covid-19 were reported on Sunday.

“Every street that has been sealed has five or more cases of Covid-19. The decision has been made to keep the residents in isolation so that the spread of the virus can be stopped,” Deputy Commissioner Hamza Shafqaat told Dawn.

According to a notification issued by the Ministry of National Health Services, available with Dawn, Islamabad’s District Health Office teams have carried out Covid-19 surveillance activities in various streets in the city.

They observed that streets with a higher number of cases needed to be sealed.

“In order to decrease further transmission of the infection in given areas. Timely and proper smart lockdown in these areas will help in cutting the chain of infection in Islamabad.

Teams from the District Health Office will monitor the implementation of standard operating procedures (SOPs) and extensive contact tracing will be carried out in these streets and adjacent areas.

The test-positivity rate rose from 3.7pc on Saturday to 3.8pc.

Mr Shafqaat said the administration is anticipating a second wave of Covid-19.

“As cases have been increasing for the last month, I believe that the second wave has already arrived in the federal capital. However a good thing is that we have fewer patients on ventilators, due to which the situation is under control,” he said.

He added that with the temperature falling, the number of cases will increase further in coming days.

Pakistan Institute of Medical Sciences Joint Executive Director Dr Minhajus Siraj said that two of the 12 ventilators dedicated to Covid-19 treatment were in use at the hospital on Sunday.

“We have 18 oxygenated beds dedicated for Covid-19 patients, and 12 are vacant as six patients were admitted to the hospital on Sunday,” he said.

“Currently, the situation is under control, but things will start worsening with the increase in the number of cases,” he said.

There were 14 cases of Covid-19 reported in Rawalpindi while 40 patients recovered from the disease.

There are currently 19 patients admitted to Holy Family Hospital, while 147 are isolated in their homes. The local administration has said that 511 people are quarantined.

Rawalpindi Commissioner retired Capt Mohammad Mehmood said 8,889 people have tested positive for Covid-19 in the division since March – 7,435 in Rawalpindi, 650 in Attock, 506 in Jhelum and 298 in Chakwal.

Previous China is rising again
Next India can use Afghan land to destabilise Pakistan: Imran