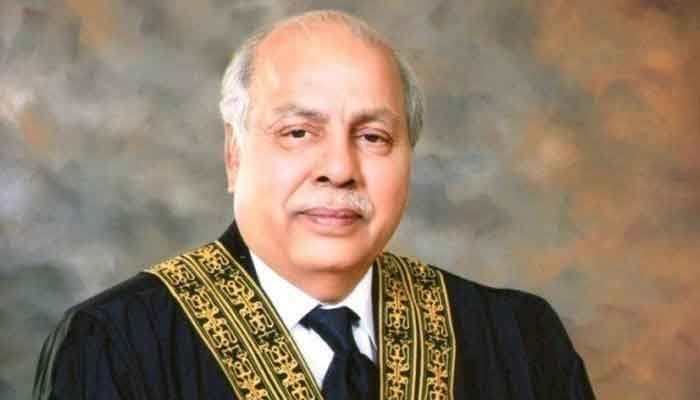 Chief Justice of Pakistan Gulzar Ahmed on Thursday took suo motu notice of the burning of a Hindu temple in Khyber Pakhtunkhwa’s Karak.

The suo motu case will be heard in the Supreme Court on January 5.

The court has also summoned a report from the chairman of the minority rights commission, inspector-general of police and chief secretary of Khyber Pakhtunkhwa regarding the incident by January 4.

During the meeting, Kumar briefed the CJP on the burning of the shrine of a Hindu saint by an angry mob in Karak district of Khyber Pakhtunkhwa.

The CJP also condemned the incident in the meeting with Kumar.

An angry mob on Wednesday attacked and set ablaze the shrine of a Hindu saint in the Karak district of Khyber Pakhtunkhwa.

According to police officials, as soon as the incident was reported, police personnel reached the site and dispersed the mob.

As reported by Dawn.com, a mob comprising “more than a thousand people”, led by local elders of a religious party, launched the attack to remove the temple.

Video clips going viral on social media show hordes of people breaking and desecrating the site while chanting slogans. Smoke could also be seen emitting from the shrine after it was set on fire.

Following the incident, the District Police Officer of Karak told Dawn News TV that area residents had called for a protest, guaranteeing it would be peaceful, but a local cleric instigated the crowd to resort to violence.

Area residents, according to the DPO, reported that the shrine was being “secretly expanded” which angered them.

Upon hearing the news, the Federal Minister for Human Rights Shireen Mazari took to Twitter and “strongly condemned” the attack.

“Strongly condemn the burning of a Hindu temple by a mob in Karak Khyber Pakhtunkhwa,” she stated.

“[The] KP govt must ensure culprits [are] brought to justice. MOHR also moving on this. We, as a govt, have a responsibility to ensure [the] safety & security of all our citizens & their places of worship,” the minister wrote.

Previous Pakistani nationals not being allowed to board flights at UK’s Heathrow Airport
Next ‘Vote ko izzat do’: PTI minister hits out at PML-N for not attending govt-opposition meet on Monday