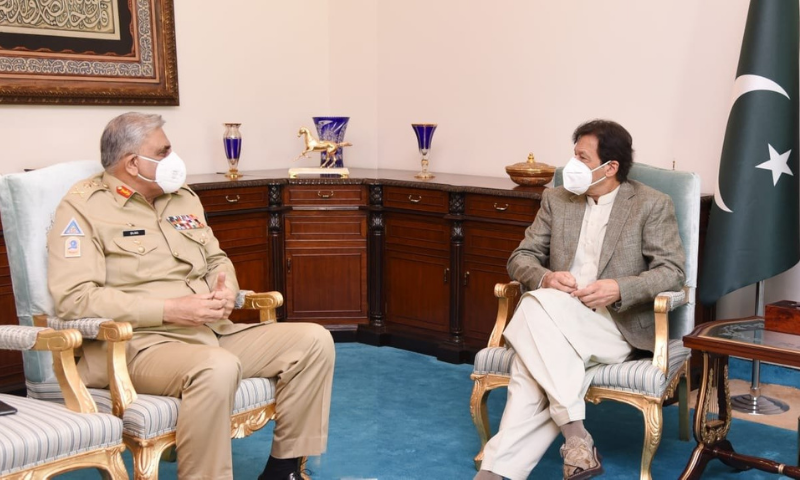 The premier, while referring to “recent efforts to stoke violence in Pakistan”, expressed the resolve that the entire nation was united “against the cowardly acts of the enemy”, tweeted PMO.

He also paid tribute to personnel from Pakistan Army, Frontier Corps and law enforcement agencies “who sacrificed their lives for the defence of the motherland”.

The meeting follows a bomb blast inside a mosque in Peshawar, where a large number of seminary students were attending a class on Tuesday morning, which killed eight students and wounded about 120 others.

It also comes amid heightened pressure from the opposition on the government through its rhetoric and public meetings under the Pakistan Democratic Movement (PDM) banner, in which PML-N supremo Nawaz Sharif claimed that the military leadership ‘brought’ Imran into power and was also ‘behind’ his ouster as prime minister in 2017.

The premier had lashed out at Nawaz for “maligning” the top army leadership, saying the PML-N supremo himself was launched into politics through the help of the military establishment.

He said the PML-N leader was using inappropriate “language” against the army and Inter-Services Intelligence (ISI) chiefs at a time when Pakistani soldiers were constantly sacrificing their lives for the nation.

Read: Three bumper rallies by PDM have shaken Pakistan’s political equilibrium in more ways than one

Later, during an interview with ARY News, Prime Minister Imran had said that meetings between PML-N leaders and the army chief were ‘a big mistake’ while questioning what had been gained from them.

“This was also our big mistake. Although General Bajwa used to tell me they were meeting. So and so was coming to meet. They will have conversation. I think this was a big mistake. They should not have been met. We should not have met them. What has been gained by meeting [them]?”

He said: “Today the abuses they are hurling, the language they are using against the army, even the enemies do not use such language. So what has been gained?”

In his latest speech during the PDM’s rally in Quetta on Oct 25, Nawaz called upon Gen Bajwa and ISI Director General Lt Gen Faiz Hameed to “account” for the country’s current situation.

“Gen Bajwa, you will have to answer for record rigging in the 2018 elections, for horse-trading in the Parliament, for making Imran Niazi prime minister against people’s wishes and [by] tearing apart the Constitution and laws, for pushing people towards poverty and hunger,” the former premier said.

He accused Lt Gen Hameed of “interfering in politics for several years with impunity” in violation of his oath.