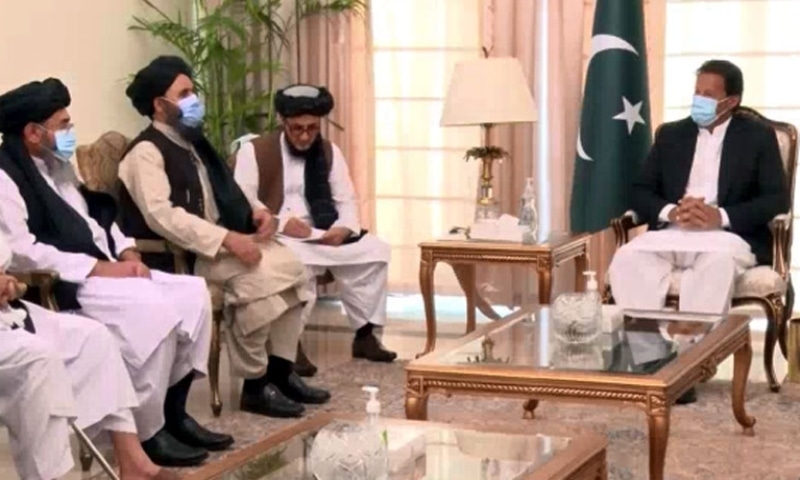 The discussions held during the meeting focused on the progress in the Afghan peace process and the way forward, with the premier saying that intra-Afghan negotiations provided a “historic opportunity” for achieving durable peace in the war-torn country, according to the Prime Minister’s Office.

The Taliban delegation had arrived in Pakistan on a three-day trip on Wednesday. The visit is taking place on Pakistan’s invitation as part of Islamabad’s efforts for outreach to all Afghan stakeholders for a peaceful resolution of the conflict, the Foreign Office said.

Prime Minister Imran expressed the hope that the Afghan parties will continue to build on recent positive developments in the intra-Afghan negotiations.

While reiterating Pakistan’s consistent support to an “inclusive, broad-based and comprehensive” political settlement, the premier underlined the need to be vigilant about the “role of spoilers”, who he said continued to make attempts to derail the peace process.

He also expressed concern over the high level of violence in Afghanistan and “called on all sides for reduction in violence leading to ceasefire”.

The prime minister underscored that a return of peace and stability in Afghanistan would provide a strong impetus to economic development, regional integration, and connectivity, which will benefit Afghanistan as well as the region.

“The TPC delegation’s visit is part of Pakistan’s serious efforts to facilitate [the] Afghan peace process to achieve a peaceful, stable, united, independent, sovereign and prosperous Afghanistan,” the PMO noted.

On Wednesday, as the Taliban delegation commenced its visit, Prime Minister Imran and Afghan President Ashraf Ghani had discussed the progress in the ongoing peace process and strengthening of relations between the two countries.

In a phone contact with Ghani, the premier reiterated Pakistan’s steadfast support for an Afghan-led and Afghan-owned peace process leading to a political solution to the conflict.

Foreign Minister Shah Mehmood Qureshi also held a meeting with the TPC delegation. He expressed the hope that intra-Afghan talks will resume from January 5, but said the venue for the next round of dialogue was yet to be decided.

The two sides in the intra-Afghan talks took a 20-day break after negotiating for nearly three months, which produced an agreement on rules and procedures for the dialogue. They were negotiating the agenda of the talks when they decided to take the break for updating the principals about the parleys.

However, there has been an air of uncertainty about the resumption of the process due to undecided venue for the next round, upcoming transition in the United States and intensified fighting in Afghanistan.