Breaking News
Home / Feature Articles / PDM to decide whether talks should be held with army or not: Bilawal Bhutto 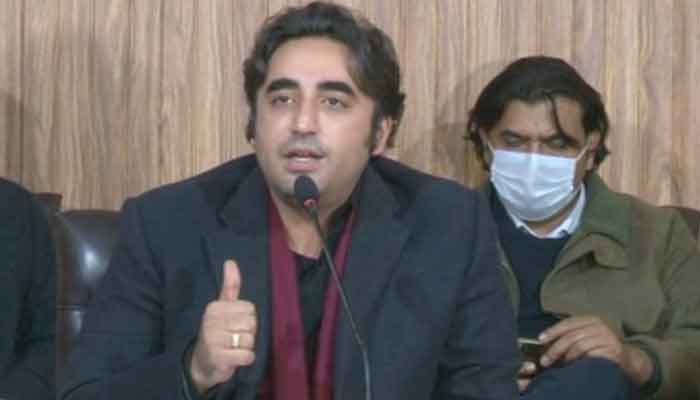 PDM to decide whether talks should be held with army or not: Bilawal Bhutto

PDM to decide whether talks should be held with army or not: Bilawal Bhutto

PPP chairman Bilawal Bhutto Zardari has said that the Pakistan Democratic Movement (PDM) is the platform which will decide whether political parties should engage in a dialogue with the armed forces or not.

“We believe the right to form a government or the right to employment is sought through democratic means,” said Bilawal during a press conference on Friday. “These will be taken through elections, we will not request for them,” he added.

The PPP leader said that the people of Gilgit-Baltistan will vote for the party and enable them to form their government with a clear majority so that the PPP’s manifesto can be implemented in the province.

“As far as talks with the armed forces are concerned, if talks will be held, then PDM is the platform that will decide that,” he said.

Bilawal vowed that the PPP will not let the government rig Gilgit Baltistan Elections 2020. He lashed out at the PTI, urging the masses not to vote for a “tsunami of unemployment and inflation”.

Bilawal recalled the areas of Gilgit Baltistan he visited while campaigning for the elections, urging masses to vote for the PPP. “I have gone from house to house to secure your votes. If you do not disappoint me on November 15, I will not disappoint you ever,” he said.

The PPP chairman urged the police and political administration of Gilgit Baltistan to “not interfere” in the upcoming elections.

Bilawal said that in his election 2018 manifesto, he had talked about granting the people of Gilgit Baltistan should be made members of the National Assembly and Senate of Pakistan.

“In this meeting [with the army leadership] I raised the objection that no representative of Gilgit Baltistan was present. If other parties and the national security guys are now coming to my page [of granting rights to GB) then I should welcome them,” he said.

The PPP chairman said that other political parties did not have any ‘integrity’ and were only now talking about the rights of the people of Gilgit Baltistan on the brink of elections.

“The way you are asking me questions, they will also be asked these [tough] questions if tomorrow they win elections through rigging,” he said.

The PPP chairman’s remarks came a day after Maryam Nawaz said the PML-N was open to dialogue with the military establishment but only if the ruling party was shown the door.

“The army is my institution,” Maryam had said in an interview with BBC Urdu. “We will definitely talk but within the ambit of the Constitution,” she added.

The PML-N leader had said she was not against state institutions but stressed that there would be no dialogue in secret.

The “incumbent government will have to go if we are to move forward”, she added.

Maryam had claimed that the “establishment had reached out to her close aides” but had not “contacted her directly”.

She also said the idea of dialogue through the platform of the Pakistan Democratic Movement (PDM) can be deliberated upon.