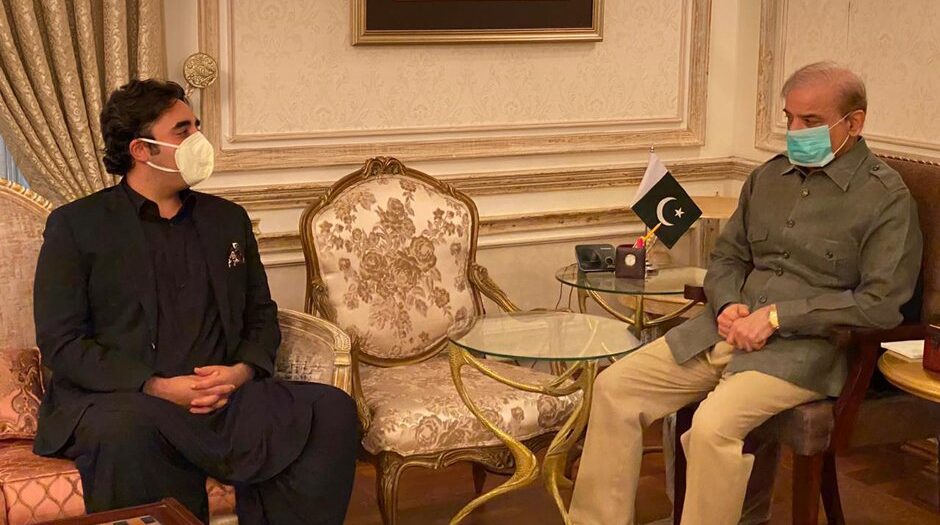 PML-N President Shehbaz Sharif on Tuesday advised PPP Chairperson Bilawal Bhutto Zardari not to adopt a “hardline” stance by submitting resignations of the party’ lawmakers and instead opt for dialogue with the government.

The PPP chairperson held a meeting with the PML-N president at Kot Lakhpat jail where Shehbaz has been imprisoned over corruption charges.

Both the leaders agreed to implement the decisions taken by the PDM and gradually increase “pressure” on the government.

Sources in the PPP said that Shehbaz suggested to Bilawal not to adopt a “hardline” position by tendering resignations at the earliest in the assemblies saying “it is the last option” and advised him to hold talks with the government.

He asked the PPP chief to seek resignations from his party’s lawmakers just like the PML-N did and use them at an “appropriate” time.

Later, while talking to media, Bilawal dispelled the impression that there were differences in the PDM for the “restoration of democracy” in the country.

He termed the resignations of the opposition an “atom bomb”, saying a strategy for its use would be devised.

“The PDM unanimously decided that its lawmakers will hand over resignations to their party chiefs by December 31,” Bilawal said.

The PPP chairperson dismissed reports that his party was against the resignations, saying “our resignations are our atom bombs and the PDM will strategise on how to use them”.

He maintained that the PDM was united and had been working to “restore democracy” in the country.

He reiterated his stance that the opposition was determined to send the government “packing”.

“This is the only way to pull the country out of the crisis. Their deadline is January 31. I want to give a message to Prime Minister Imran Khan. Resign.”

Bilawal said the PTI was unable to run the government affairs and that the people were dying in the “tsunami of inflation”.

When asked if the opposition would be open to a national dialogue, the PPP chairperson noted that there was no point in holding talks with a “puppet” government.

“When an important issue like the FATF was being debated in the House (parliament), the opposition leader was not allowed to speak. In such a situation, on which forum should we hold a national dialogue?”

Replying to a question, Bilawal maintained that he had spoken to Maryam Nawaz about his visit to the PML-N president at Kot Lakhpat jail.

“Since I am in Lahore, we submitted a request [to the jail authorities]. It is our tradition to support even our greatest adversaries during tough times such as these. I wanted to offer my condolences (over Shehbaz’s mother demise),” he said.

“This is the first government to politicise a mother’s death and we condemn it.”

While referring to the arrest of Shehbaz and PPP’s Khursheed Shah, Bilawal said the government desired to put its critics and leaders of opposition in prison.

“Where in the modern world would you see current and former leaders of opposition behind bars?” he asked.

“This is not only the violation of human rights and democratic norms, but is the reason why the country is not progressing,” he added.